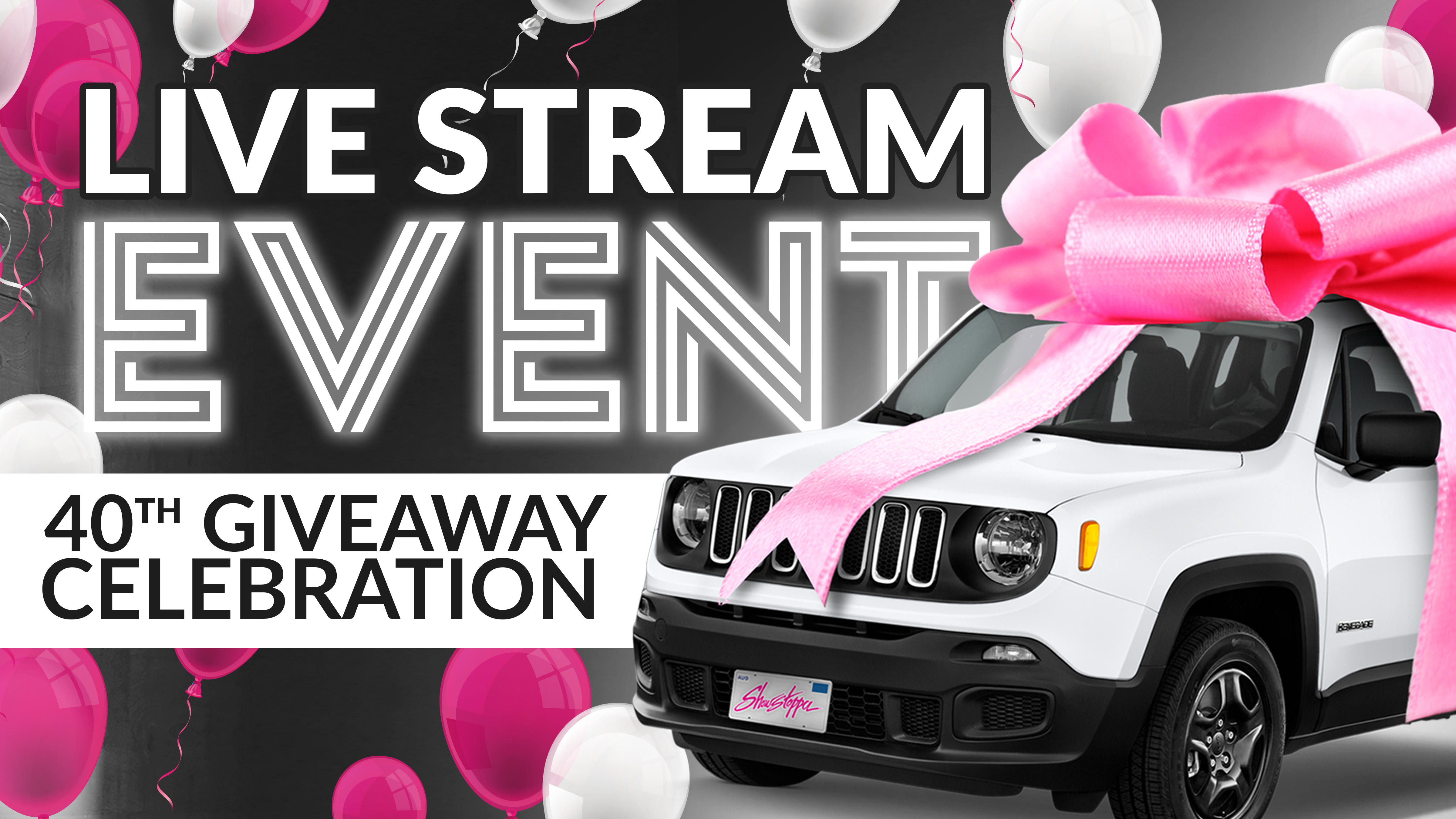 We are thrilled to celebrate our 40th Anniversary in 2018. As a thank you to all of the studios that have supported us through the years, we are giving each dance studio that attended our 2018 National Finals an opportunity to drive away in our Showstopper Jeep Renegade!

We will be LIVE at our headquarters in Myrtle Beach to pick the winner of our big 40th Giveaway! Watch the drawing on August 8th, 2018 at 8PM EST. You will see an exclusive tour of Showstopper’s offices, recap our 2018 Finals Competition Season, and more! Don’t miss this Showstopper LIVE event and see if your studio is our lucky winner!

AGREEMENT TO OFFICIAL RULES: Participation constitutes an entrant’s full and unconditional agreement to these Official Rules and Sponsor’s decisions, which are final and binding in all matters related to the Sweepstakes. Winning a prize is contingent upon fulfilling all requirements set forth herein.

Entrants must be a dance studio within the United States of America that performs a routine in a 2018 Showstopper National Finals. Entry is limited to one entry per dance studio. Entrant must have a representative that is at least 18 years old with a valid United States driver’s license and evidence of legally required insurance to take delivery.

A.       During the Sweepstakes Period, Entrants must attend a Showstopper National Finals and fill out an entry form (“Entry Form”) at the Showstopper merchandise table.

Limit one (1) entry per dance studio. Entries in excess of the stated Sweepstakes Period limitation will be void. Entries become the sole property of the Sponsor and will not be returned.

In order to complete the verification of the Grand Prize Winner, the Provisional Grand Prize winner, within the time set forth on the notification documents must (a) sign and return an Affidavit of Eligibility and a Liability Release; (b) provide evidence of a valid U.S. driver’s license; (c) provide evidence of legally required insurance; and (d) complete all necessary tax and registration forms.

The return of any prize or prize notification as undeliverable, or a Prize Winner’s failure to otherwise comply with these Official Rules will result in disqualification, the forfeiture of all interest in the prize, and selection of a substitute Prize Winner from among all remaining eligible entries received. Unless prohibited by law, acceptance of a prize constitutes permission for the Sponsor and their respective advertising to use a Prize Winner’s name, address (city and state), and photo, image and/or likeness for any commercial, publicity or promotional purposes without further notice, compensation, review or approval, worldwide and in perpetuity, in any and all forms of media, now known and hereafter devised, including without limitation the Internet.

A PARTICIPANT, INCLUDING A PROVISIONAL WINNER, IS NOT A WINNER OF A PRIZE UNLESS AND UNTIL SPONSOR HAS COMPLETED ITS VERIFICATION OF PARTICIPANT’S ELIGIBILITY AND COMPLIANCE WITH THESE OFFICIAL RULES.

TAXES. All federal, state and/or local income and other taxes, including sales, license and registration fees, are the winner’s sole responsibility. Grand Prize winner will be required to complete and sign an IRS W9 form upon acceptance of the prize. Sponsor will then issue an IRS 1099 form pursuant to IRS rules and regulations.

ODDS: Odds of winning depend on the total number of eligible Entries received during the Sweepstakes Period.

GENERAL CONDITIONS: By entering the Sweepstakes, each entrant, on behalf of himself/herself, and his/her executors and heirs, agrees (a) to be bound and abide by these Official Rules and by all decisions of Sponsor, whose decisions are final and not open to appeal; (b) to release, indemnify, defend and hold harmless Sponsor, and its and their parents, subsidiaries, affiliates, members, shareholders, agents, representatives, employees, suppliers, agencies, successors, assigns, licensors, licensees, advertising or promotional agencies and any prize-sponsoring agency (collectively, “Released Parties”), from any and all liability whatsoever in connection with or related to this Sweepstakes, including, without limitation, from any and all causes of action, liabilities, suits, claims (including but not limited to, third party claims that may be made against entrants, and claims arising out of or relating to acceptance, receipt, possession or use/misuse of any prize, or any publicity or other public exposure of entrants, including without limitation, claims concerning infringement or invasion of entrants’ privacy or publicity rights, or defamation, or acts undertaken in preparation for, or participation in, the Sweepstakes), cross-claims or counterclaims, costs, injuries, losses or damages or demands of any kind (including without limitation personal injuries, death, damage to, loss or destruction of property, rights of publicity or privacy, defamation, or portrayal in a false light) (collectively, “Claims”), WHETHER OR NOT ARISING FROM THE NEGLIGENCE OF A RELEASED PARTY; (c) on behalf of himself/herself, and his/her executors and heirs that he/she has no right to bring, and covenants not to bring, any claim, action, or proceeding of any kind or nature whatsoever against the Released Parties; (d) to assume all risks, express or implied, associated with all Claims released above, including without limitation, all risks concerning entry into and participation in the Sweepstakes; and (e) that NEITHER SPONSOR NOR ANY OF THE RELEASED PARTIES HAVE MADE OR MAKE OR ARE RESPONSIBLE OR LIABLE FOR ANY WARRANTY, REPRESENTATION OR GUARANTEE, EXPRESS OR IMPLIED, RELATIVE TO THIS SWEEPSTAKES OR A PRIZE, INCLUDING BUT NOT LIMITED TO, ITS QUALITY OR FITNESS OR MERCHANTABILITY, AND ALL PRIZES ARE TENDERED TO ENTRANTS ON AN “AS IS” BASIS. THERE ARE NO WARRANTIES THAT EXTEND BEYOND THE DESCRIPTION ON THE FACE OF ANY SWEEPSTAKES MATERIALS OF ANY PRIZE.

Notwithstanding anything to the contrary contained in these Official Rules, Sponsor further reserves the right, in its sole discretion, to suspend, modify or cancel the Sweepstakes, or any portion thereof, if it cannot be run as originally planned, including by reason of tampering, unauthorized intervention or fraud; infection by computer virus; malicious software attacks, bugs or other problems; or force majeure or other causes beyond the control of Sponsor which impair the integrity or corrupt the administration or security of the Sweepstakes. In such event, the Sweepstakes shall be conducted from among all eligible entries received, if any, prior to such suspension, modification or cancellation.

LIMITATIONS OF LIABILITY: The Released Parties are not responsible for: (1) any incorrect or inaccurate information, whether caused by entrants, typographical, printing errors or by any of the equipment or programming associated with or utilized in the Sweepstakes; (2) for lost, interrupted or unavailable network, server, Internet Service Provider (ISP), website, or other connections, availability or accessibility or miscommunications or failed computer, satellite, telephone or cable transmissions, lines, or technical failure or jumbled, scrambled, delayed, or misdirected transmissions or computer hardware or software malfunctions, failures or difficulties; (3) unauthorized human intervention in any part of the entry process or the Sweepstakes; (4) other errors or problems of any kind relating to or in connection with the Sweepstakes, whether computer, network, technical, mechanical, typographical, printing, human or otherwise, including, but not limited to, errors or problems which may occur in the administration of the Sweepstakes or the processing of entries, the announcement of the prizes or in any Sweepstakes-related materials; (5) late, lost, undeliverable, inaccurate, incomplete, misdirected, delayed, damaged, garbled or stolen entries or mail; or (6) any injury or damage to persons or property which may be caused, directly or indirectly, in whole or in part, from entrant’s participation in the Sweepstakes or receipt or use or misuse of the prize. If for any reason an entrant’s entry is confirmed to have been erroneously deleted, lost, or otherwise destroyed or corrupted, entrant’s sole remedy is another entry in the Sweepstakes, if it is possible. No more than the stated number of prizes will be awarded. In the event that production, technical, seeding, programming or any other reasons cause more than the stated number of prizes as set forth in these Official Rules to be available and/or claimed, Sponsor reserves the right to award only the stated number of prizes by a random drawing among all legitimate, un-awarded, eligible prize claims.

DISPUTES: Except where prohibited, each entrant agrees: (i) any and all disputes, claims, and causes of action arising out of or connected with this Sweepstakes or any prizes awarded shall be resolved individually, without resort to any form of class action, and exclusively by the federal or state courts in the State of South Carolina; (ii) any and all claims, judgments, and awards shall be limited to actual out-of-pocket costs incurred, including costs associated with entering this Sweepstakes, excluding attorneys’ fees; and (iii) under no circumstances will entrant be permitted to obtain an award for, and each entrant hereby waives all rights to claim, punitive, incidental, and consequential damages and any other damages, other than for actual out-of-pocket expenses. All claims or disputes related to or involving these Official Rules and/or this Sweepstakes shall be governed by and construed in accordance with the laws of the State of South Carolina, without giving effect to any choice of law or conflict of law rules, which would cause the application of the laws of any jurisdiction other than the State of South Carolina.

PUBLICITY: Acceptance of the prize constitutes permission for Sponsor and its advertising and marketing agencies to use winner’s hometown, opinions, name, likeness and/or voice for advertising and promotional purposes without additional compensation, except as otherwise prohibited by law. Sponsor is not responsible for any typographical or other error in the printing of the rules, or the administration of the Sweepstakes.