Home Dance Aaron Burr tells us about NBC’s World of Dance and Becoming a... 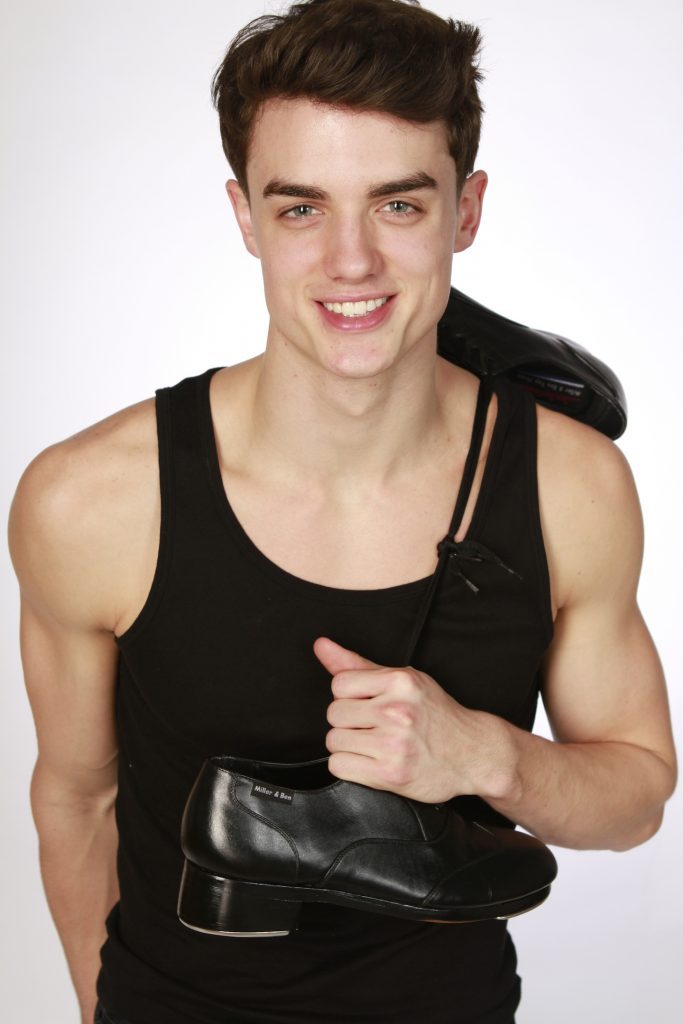 You might know Aaron Burr from some of Showstopper’s dance conventions. He is an awesome staff member and a multi-talented performer. (What more could you ask for in a dance teacher?) Recently, Aaron headed into whole new territory with World of Dance as part of Nick Young’s tap group, Rhythmatic. Aaron danced alongside five other amazing dancers; Kurt Csolak, Patrick Cook, Aaron Parkhurst, and Nick Young himself, for a chance at $1 million dollars.

We just had to ask him about it.

If you haven’t been watching, World of Dance is a dance competition show loaded with talented top performers of all ages. They perform all different genres of music and dance, and group sizes range from solos to groups of up to twenty performers. The show not only features the world’s best dancers, it also features amazing judges, NE-YO, Derek Hough, and Jennifer Lopez. It’s an amazing visual experience that gives the world a taste of all kinds of dance and the best dancers out there.

Aaron Burr is one of those amazing dancers. Throughout the competition, Aaron says, it was clear that Rhythmatic was the underdog. Facing off against teams from all genres with up to twenty dancers, Rhythmatic was the smallest with only five dancers. But small numbers don’t mean small talent. Aaron and his teammates brought their all to the stage.

But that was only challenge number one. To make things even more difficult, Aaron wasn’t originally a competing member of Rhythmatic. One of the original five dancers was getting married and couldn’t make it, so Aaron was invited to join the group. With only a day and a half to rehearse before filming, Aaron says that going on stage for World of Dance felt like being a “modern day gladiator.”

“I’ve done a lot of shows in front of tens of thousands… This had my adrenaline pumping the most.”

This wasn’t Aaron’s first televised competition. He also competed on America’s Got Talent twice, but he says the experiences are completely separate. This wasn’t a talent show. World of Dance brought in some big groups, (groups that Aaron had admired and looked up to when he was younger) both in size and talent. He was pleased that they were all treated like the professionals.  The atmosphere is one of the many reasons he feels lucky to have been on the show.

Being the only tap group in the team division, Rhythmatic had a small disadvantage. Tap is what Aaron calls a “forgotten style.” Everyone tries tap alongside ballet and jazz when they start dancing, but not many people continue to do tap later on. Regardless of whether they made it all the way to the end of the competition, the members of Rhythmatic wanted to make sure tap dancing got the spotlight it deserved. 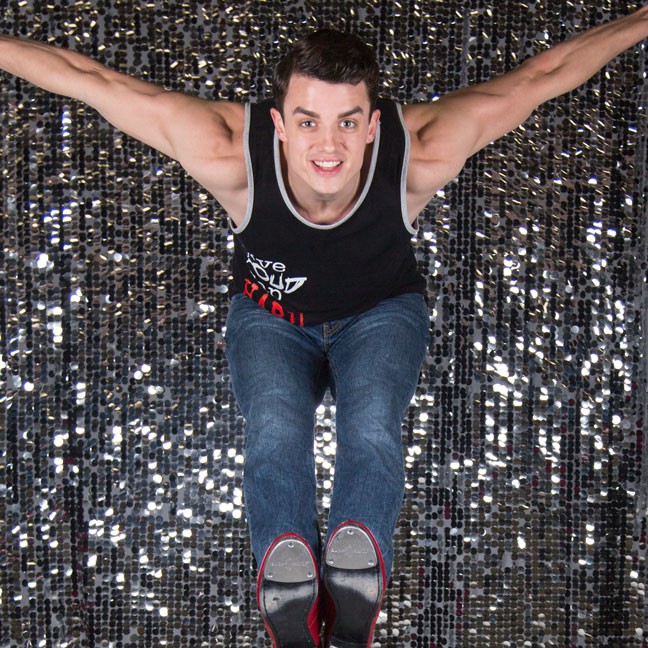 Despite being a tap group (and a small one at that), Aaron was happy to find that Rhythmatic would be competing with the same level of respect as other groups in different categories and performing different genres as they all danced toward the million dollar prize.

World of Dance was a big deal for Aaron, and he was proud to be a part of the show’s impressive lineup, but his dance history goes way back before World of Dance and continues on after. (We’ll tell you all about it, but to find out if Rhythmatic won the big prize, you’ll just have to watch and find out.)

Aaron started dancing at three years old. Introduced to the dance world by his older sister, he practiced and danced his way to age six. At that time, other kids started calling him “ballerina boy” and picking on him for participating in what a lot of people consider to be a girls’ sport. Aaron wanted to quit.

When he told his mom that he planned to end his dancing career after just three years, she told him that he could do that if it was what he wanted, but he would have to call his dance teacher himself. Aaron’s dance teacher wouldn’t let him quit. Showstopper is thankful for that, and so is Aaron. If he had quit, he would not be where he is today, in the dance world or in life in general. Aaron has visited twenty countries and performed in more productions than he can count. Not to mention the values instilled in him by his dancing career such as dedication and perseverance.

“If being different makes you happy, be different.”

It’s also that moment that makes Aaron work had to prove that male dancers can succeed on this career path, and that dancing isn’t just for girls. One of Aaron’s teachers, when he was still a young dancer, was a man named David Mann. He was (and still is) one of Aaron’s greatest mentors. Aaron says he doesn’t know where he would be had he never met Mann or what he would be doing without dance in general, especially tap.

“No matter how things are going, putting on tap shoes is an instant mood changer.”

We wondered why, in a world so enthralled with hip hop, Aaron Burr latched onto tap. When we asked him, he said that tap dancing is his favorite because you’re not just dancing to music, you’re creating music while you’re dancing. Tap shoes clicking, every dance highlights parts of the music you may have never noticed otherwise and even adds to the rhythms that are already there.

Other styles of dance don’t have that extra element. A tap dancer has to worry about his appearance and his sound. It’s a delicate balance. When you’re tap dancing, you’re creating your own music. Because of this, freestyle tap is one of Aaron Burr’s favorite things and something he works hard at (but we’ll get to that later).

Let’s jump ahead a few years. At age 13, Aaron entered a contest that eventually led to him touring for nine months with Tommy Tune in a production of Doctor DoLittle. From there, Aaron has gone on to work at the Merry Go Round Theater in New York when he isn’t working on landing a role on Broadway. He told us that a lot of his work at the theater (and in musical theater in general) is not tap. Like many dancers, Aaron does it all, practicing in multiple genres of dance. (He even sings!)

When it comes to tap, Aaron is currently dedicated to and tours with the Tap Dogs. Interestingly enough, when he was six and wanted to quit dance, Aaron saw a video of the Tap Dogs performing and said to his mom, “I can do that.” Now, we know he most certainly can do that!

Between Tap Dogs tours, theater productions, and Showstopper conventions, Aaron Burr works on something a little different. Someone that would rather be practicing than doing nothing at all, Aaron takes his freestyle skills to the public with his street performing group, Mediocre Flow. He says it’s interesting performing for people that don’t have to watch. There aren’t any rules in freestyle. He says it’s the freest form of tap for him, but beyond that he, just by being out there, has a chance to change someone’s entire day or brighten their mood.

Clearly Aaron has got it going on, but no matter his fame and success, he is still a dancer like any of the people he works with or any of the kids he teaches, and he wants them all to see that what he has achieved is real and possible and that, no matter what, dance will always be a part of anyone that dedicates their time to it.

Anything You Want to Be

When we asked what he thought about the overall achievability of being a professional dancer, he said this, “In my opinion, if you hustle after something hard enough, you can make it happen. You can be anything you want to be.”

Once a Showstopper, always a Showstopper. Not only is Aaron one of Showstopper’s faculty members, he was once a young dancer competing on the stage and practicing his moves at conventions just like all of the young dancers he teaches.

When it comes to dancing (whether it’s tap, jazz, hip-hop, ballet or something else) or following your dreams, there are few people better to look to for inspiration than Aaron Burr.

These are the 2023 Grammys Fashion Star Standouts

Beyoncé Remains QUEEN: These are Your 2023 Grammys Winners

5 Must-Reads we LOVE for February (And No, They’re Not All...