Home Dance On The Radar:Charlize Glass 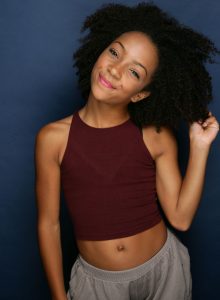 Have you ever heard of 8 Flavah’s. If not it was one of the youngest and most dynamic dance groups to compete on America’s Best Dance Crew during season 7. It was also home to then 10 year old dance star Charlize Glass.

Now age 14, Charlize has been werking her way into the spotlight and people are surely taking notice. Charlize dances with so much power, precision and fierceness that it was only right we featured her for our On The Radar series.

Her resume is just as long as some of the most seasoned dance veterans. She  has been on America’s Got Talent, The Ellen Show, Maury’s Mini Idol show and danced on VH1 Divas for pop star Ciara. She also recently competed on go90’s Dance off Juniors, and took home the winning title.

It doesn’t stop there she has been in some of the best music videos around such as Willow Smith’s “Whip My Hair” music video, featured in Ciara’s “Got Me Good” video and a Mindless Behavior video .

If you don’t believe me just look down below at some of her videos to show you just how awesome this girl really is!

You know that you’re popping when THE Beyonce reposts a video of you covering one of her songs!

Keep rocking it Charlize we can not wait to see what else you have in store!

Balancing Act: A Day in the Life of A Dancer Attending College