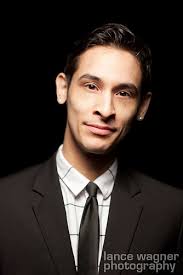 You have probably seen – and even danced – with Sam Picart at Showstopper dance conventions, so you know as well as we do that he is an amazing dancer and wonderful person. But, do you know how get got started on his dance career path?

Sam began his formal dance training with his Aunt Jennifer Picart-Branner (formerly of theFrankfurt Ballet) when he was eighteen, and before that, he studied various styles of street dance when he was fifteen. He received a Bachelor of Fine Arts degree from Cornish College of the Arts and has studied on scholarship at the Joffrey Ballet in New York City. Sam has danced featured roles in numerous productions including the NutCracker, Sleeping Beauty, Jose Limon’s Psalm, and Camille A Brown’s New Second Line.

He is also a founding member of Ashani Dances, a project-based, professional dance company committed to education directed by Iyun Ashani Harrison. Recently, Sam was the chosen winner of “Ellen’s Dance-Off” and was a featured guest on Ellen.

A talented choreographer, Sam has also worked with notable choreographers such as Mandy Moore, Camille A Brown, Victor Quijada and Iyun Ashani Harrison. He has contributed his talents to works for the Seattle Academy of Arts  & Sciences, Cornish Summer Dance Program, the Seattle International Dance Festival, and Full Tilt. Currently, he teaches, choreographs and performs all over the US with Seattle as his home base. In Washington, Sam teaches in Greenlake, Bremerton, Downtown and West Seattle.

Sam does it all, and we couldn’t be more happy to have him as part of the Showstopper family! Check back later for an exclusive video of Sam’s 2017 teacher showcase from this year’s dance conventions!