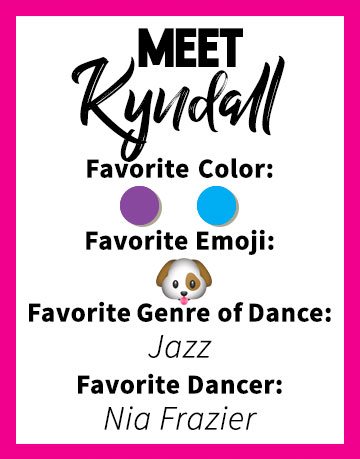 When you think of entrepreneurs and people who have taken time out of their lives to help others, you probably don’t picture an 11-year-old. In fact, you probably think of 11-year-olds playing on swing sets and figuring out middle school – not worrying about the problems their communities face. But, that’s exactly what Kyndall Williams is doing. She isn’t your average sixth grader. We were lucky to meet her and learn about her amazing work as a philanthropist, a dancer, a student, and even as an author!

“When I saw that some kids didn’t have what they needed for school, I wanted to help them with that.”

In January 2016, Kyndall founded her non-profit, The Kyndall Project, with the help of her mother April Reich. The project’s goal is to keep children from going hungry when they are outside of school and always give them access to new and interesting reading material. Kyndall knew that some of her classmates only had access to food, books, and other valuable resources when they were in school and time outside of that public space meant they had to do without. Learning is important to Kyndall, so making sure that the kids around her have the same access to expand their knowledge that she does is important too.

One Backpack at a Time

Since its founding, The Kyndall Project has donated over 700 backpacks to children in need. These backpacks are stuffed with healthy snacks, gently used books, school supplies, and hygiene items – anything that low-income families might struggle to acquire. Through their backpack jams, The Kyndall Project collects all of these items, setting higher and higher goals each year. It is clear that they do not limit themselves to what they have already accomplished. They are always looking forward and finding ways to help more and more people. Their reach does not just extend to Kyndall’s community in Winston-Salem, North Carolina. The Kyndall Project donates supplies to schools, shelters, and other organizations in the United States as well as in underprivileged countries. They spread their love and support to people in need wherever and whenever they can.

Kyndall does not just put her efforts into her charity organization, though. A bright girl full of amazing ideas, Kyndall also puts her efforts into writing. In 2013, she wrote her first children’s book How Tara the Turkey Escaped Being Thanksgiving Dinner, a story about discovering that family is the most important thing. The adventures of a Thanksgiving turkey were just the beginning. Kyndall has also gone on to write two more children’s books: Sara’s School Hair Blues and Sara Starts a Non-Profit: The Sara Project. In these books, it is clear that Kyndall is a caring person who understands something many people don’t learn until they are older – everyone has a story and everyone can help to make the world a better place.

It is hard to believe that with all of her endeavors, Kyndall would have time for anything else, but she does! Kyndall is a dancer. Dancing with Positive Image Performing Arts, she has competed as a jazz, ballet, and hip-hop dancer and gone on to win several medals and trophies.

Honor role student, creator of an astounding charity, dancer, writer, we don’t know how Kyndall Williams finds the time to do it all, but we know that with every new project she takes on, she is working to put positivity into the world. One day, Kyndall hopes to become a doctor, scientist or artist, but she wants to graduate from Harvard University first, and we couldn’t imagine Kyndall doing anything less than spectacular!

For more information about The Kyndall Project, visit www.thekyndallproject.org

To find out more about Kyndall’s books, click here. https://www.thekyndallproject.org/blank

She’s a Fan of Her Fans: Tatyana Joseph on Creating a Postive and Uplifting Community